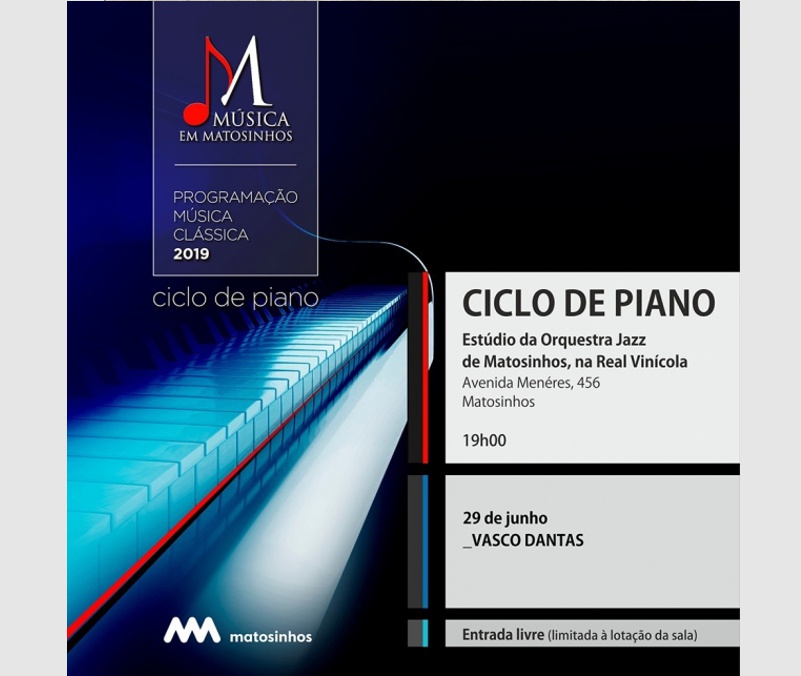 An extensive program that goes from Maurice Ravel to Adolf Andrey Schulz-Evler, through Franz Liszt, Claude Debussy and Luís de Freitas Branco, will compose the last recital of the piano cycle that since the beginning of May has brought to the Studio of the Jazz Orchestra of Matosinhos some of the best national interpreters. The final concert, free and scheduled for Saturday, June 29, at 7 pm, will be played by Vasco Dantas, a Matosinhense who has won more than 50 prizes in international competitions in several countries and has performed in 20 countries on four continents.

The recital of Vasco Dantas will open with the works “Jeux d’eau” (1901) and “Gaspard de la Nuit” (1908), which Maurice Ravel composed from poems / costumes by Louis Bertrand. Debussy will be heard “La Cathedral Engloutie” and “Ce qu’a vu le vent d’Ouest”, pieces taken from the “Préludes, livre I”, which will follow the “10 Preludes” that Luís de Freitas Branco created between the years of 1914 and 1918, and dedicated to Vianna da Mota.

From the vast work of the Hungarian Franz Liszt, bold and revolutionary, Vasco Dantas will interpret the compositions “Jeux d’eau à la Villa d’Este”, taken from the III volume of “Années de Pèlerinage”, “Ballade No. 2” and “Auf dem Wasser zu singen “. The recital will close with the transcription that in 1904, the Polish Schulz-Evler made of the waltz “Blue Danube”, of Johann Strauss.

Started on May 4, the piano cycle of the Matosinhos Music program brought Mário Laginha, Pedro Burmester, Fausto Neves, Luís Pipa and Marta Meneses to the Matosinhos Jazz Orchestra Studio (Avenida Menéres, 456). Music in Matosinhos, an erudite music program of the Municipality of Matosinhos, has been taking place for more than a decade and includes this year, among others, a series of free recitals from the Quarteto de Cordas de Matosinhos in the county churches, with the objective of decentralize and democratize the access and enjoyment of classical music.