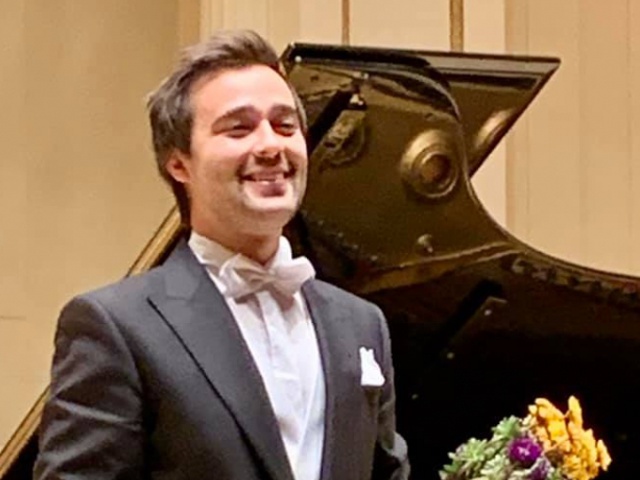 “Feel free to create your own story for each of these preludes,” pianist Vasco Dantas encouraged the big crowd who’d come out for his New York debut at Carnegie Hall yesterday. Playing from memory for the better part of two hours, he gave them a panoramic view from five thousand feet. The music didn’t need titles or explanations: whatever was there, he brought out in stunning focus.

The most highly anticipated part of the program comprised a very rarely performed, pentatonically-spiced suite, Portuguese composer Luis de Freitas Branco’s 10 Preludios. Interspersing these World War I vintage pieces with five from Debussy’s 1910 Book 1 might well seem ludicrous on face value. But in a particularly sharp stroke of programming, Dantas had rearranged them so that, at least for those familiar with the French composer, there was never a question as to who was who.

And Branco’s music in many ways is more Debussy than Debussy himself: what a discovery! An Asian influence, often gamelanesque, sometimes mystical, was ubiquitous, as were close harmonies that sometimes reached an aching unresolve. Taking his time to let the narratives unfold, Dantas revealed a lullaby cached inside the ripples of Branco’s first prelude, followed by the vigorously waltzing, chiming incisiveness of the second.

The first of the Debussy works, The Sunken Cathedral, was also a revelation in that the pianist bookended its opulent languor and nebulous mysticism around a sternly rhythmic midsection: this was one striking edifice rising from the depths! Other delightful Debussy moments abounded, particularly the deviously blithe song within a song in What the West Wind Saw, and the momentary fish out of water amidst the sun-splattered ripples of Sails.

The rest of the Branco preludes glittered with minute detail. Spare, wintry impressionism moved aside for sharp-fanged, modally-tinged phantasmagoria and a slightly muted mockery of a march. The most dramatic interlude was in Branco’s Modern Ride of the Valkyries, its grim chromatics bordering on the macabre. The most technically challenging was the Preludio No. 5, Branco’s own relentlessly torrential counterpart to Debussy’s famous hailstorm shredding the vegetation.

Dantas brought equally telescopic brilliance to an old favorite of the Halloween repertoire, Moussorgsky’s Pictures at an Exhibition. Yet not once did he go over the line into grand guignol: he left no doubt that this was a requiem. Who would have expected the carnivalesque creepiness of The Gnome to be dignified, and balanced, with just as much quasi-balletesque grace? The Old Castle may be a familiar horror theme, but Dantas’ insistently tolling low pedal notes reminded that this was in memory of a most original friend.

There were a few points where Dantas brought the menace to just short of redline – those were truly mad cows! – but otherwise, this was about poignancy and reflection. Dantas’ unwavering, perfectly articulated, otherworly chattering phrases in Ballet of the Unhatched Chicks were spine-tingling. The contrasts between the elegant Samuel Goldenberg and his lumbering namesake from the boondocks were striking yet sympathetic. Similarly, the grief in Dantas’ vast, desolate interpretation of The Catacombs was visceral, as was the unexpectedly distant horror of Baba Yaga. And he drew a straight line all the way back to Beethoven with the long crescendos and false endings after the whirling, evilly gleeful peasant dance in The Great Gate of Kiev.

After a series of standing ovations, he encored with his own gleaming, moodily Chopinesque arrangement of the Burnay Fado, from his home turf, complete with sparkly ornamentation mimicking a Portuguese twelve-string guitar. Let’s hope this individualistic rescuer of obscure and forgotten repertoire makes it back here soon.