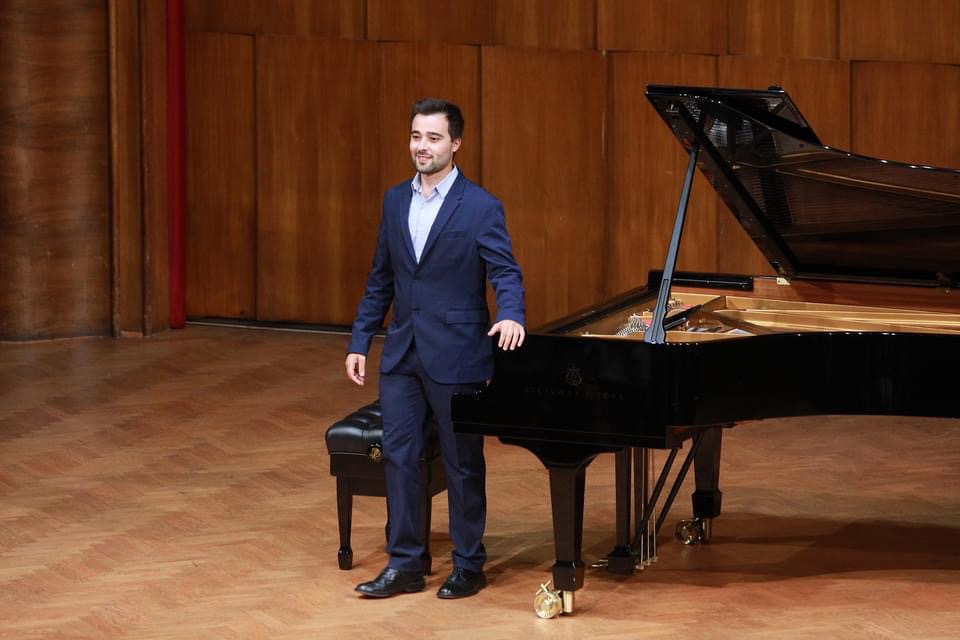 The concert of pianist Vaško Dantaš in the big hall of Kolarac’s endowment and within the Art Link festival was a rare opportunity for the audience to get acquainted with a slightly different pianist repertoire. Last year, this artist released a CD containing cycles and salon pieces by Robert Schumann, Carl Reinecke, as well as Portuguese composers Viane da Motte, Alexandria Hey Colas, Oscar da Silva and Eduardo Bourne. At the Belgrade concert, Dantash performed the same compositions that were on that edition, so the pianist even respected the order in which they were played. What all the authors have in common is that they are romantics who wrote miniatures of a lyrical and playful character.

Dantaš is a performer of exceptional technical possibilities who, in addition to that, manages to function his abilities in order to create short, but impressive musical expressions. The performance of Robert Schumann’s Children’s Scene cycle and several transcriptions of Karl Reinecke’s Schumann Songs were an indication that Dantash has an exceptional sensibility for performing romantic miniatures. With calm gestures and discreet body movements, he made such contact with the keyboard through which the unity of sound and movement could really be noticed. Lyrical melodic movements were adorned with a subtly shaped and meaningful tone. Deep immersion in the very essence of the sound, meant emphasizing aliquots of high tones, refined measured echoes, perfectly set balance between melody and accompaniment and fast and precisely played passage movements. The use of dynamic relations in these two cycles was adapted to small forms, and in fact, when it comes to the sentimentalized lyrics of early romanticism, Dantaš showed an enviable skill of interpretation at the concert.

The compositions of the Portuguese romantics Viane da Motte, Alexandria Hey Colas, Oscar da Silva and Eduardo Burnay were interesting, because it is salon music enriched with melodies originating from Portuguese dances and fades. It is obvious that all these composers were influenced by German romantics, so the combination of German and Portuguese composers in the repertoire was a logical and original choice.

The performance of pianist Michel Dalberto at this year’s Art Link Festival was an opportunity to meet a pianist of the highest quality. Already well known to the local audience, at the recital in the great hall of Kolarac’s endowment, he presented himself with compositions by Franz Liszt, Claude Debussy, Maurice Ravel and Robert Schuman.

Every time we listen to Dalberto’s interpretations of romantic compositions of a lyrical or sentimental character, some of the universally classical qualities that may not be expected in pieces such as Oberman’s Leaf Valley or the Transcendental Landscape Etude become obvious. It could not be said that in their performance the approach of the pianist was objective, nor that he was distant in relation to the musical content, because his statement does not lack narrative. Alberto makes an impressive edge, his dynamic amplitude is huge, but still, there is a certain amount of moderation, or even better, harmonization of strong contrasts that especially accompany the piece Oberman Valley. Precisely because of that property, we could say that he is a representative of the French piano school.

The same could be said for the performance of the cycle Fantastic Pieces by Robert Schumann. A series of eight piano pieces, it is performed with very clearly presented characters and an impressively clean sound image. In the context of interpreting Schumann’s music, this fact is unusually important, because pianists often know how to deceive dense fabrics built from the simultaneous movements of different sections that need to be put in good balance. The way in which Dalberto arranged these movements, speaks of the fact that it can be rightly said that he is, in fact, a specialist in performing Schumann’s music.

However, we could make the same statement regarding the performance of the music of Claude Debussy and Maurice Ravel. This pianist made a separate cycle from six of Debussy’s preludes from both volumes, Fog, Wind in the Mountain, Dead Leaves, Anacapri Hill, Steps in the Snow and What the West Wind Saw. It is characteristic that in the preludes in which the movement of fast passages occurs, Dalberto almost released their overflowing properties of the physical, as if they were initiated independently of the performer’s body. Particularly impressive were the moments in which the melodies were drawn through the movement of a kind of arabesques, while the mixing of colors was strictly controlled by the right pedal. At no point did the pianist allow the various coloristic sections to merge into one, common sound, but were all the time recognized as independent entities. On the other hand, slow-paced melancholic preludes were meditations in which the utterance was built through the thoughtful construction of melodic-harmonic movements that received their full meaning in the final, long and resounding chords. The same could be said for the piece Sad Bird from the cycle Mirrors by Maurice Ravel, while the famous toy Alborada del graciozo was the missing character that was bypassed in the performance of Debussy’s preludes.

Michel Dalberto’s concert was diverse in the sense that this artist tried his hand at all kinds of characters and styles for which he is known as a top performer. The lyrics, meditations and dances of early romanticism and impressionism and the strong leaf edge are all performed in a lively and striking way and, most importantly, with high aesthetic standards.