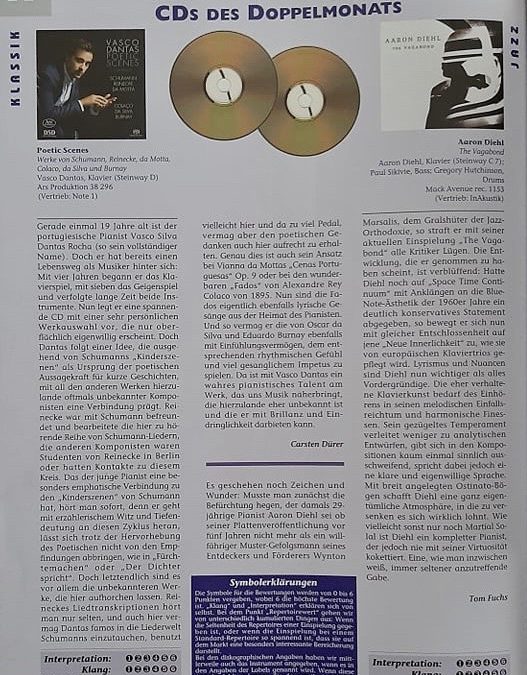 „Only 19 [28] years old is the Portuguese pianist Vasco Silva Dantas Rocha ( that is his complete name ) but he has already finished a journey through life as a musician:

being 4 years old he began to play the piano. When he turned 7 he played the violin and both instruments he played for a long time.

Now he presents an exciting CD with a very personal selection of works only seeming stubbornly superficially at first sight. However Dantas follows an idea. He takes Schumanns “Kinderszenen” as an origin of poetic strength for short stories and all the other often unknown composers and their works have connection to this origin.

Reinecke was friends with Schumann and transcripted some Schumann songs you can listen to on the CD. The other composers were Reinecke`s students or were in touch with those circles.

The young pianist has a special empathic connection with Schumann`s “Kinderszenen” you can hear immediatly. He leads to that cycle with storying telling wit and profound interpretation. Despite emphasizing poetic he does not get away from emotions as in “Fürchtemachen” as well as in “Der Dichter spricht”.

But in the end above all the more unknown compositions pricks up our ears. Reinecke`s song transcriptions you only hear rarely. Also there Dantas is able to plunge into Schumann`s world of songs maybe he uses the pedal too much sometimes but he is capable of maintaining the poetic idea.

That is exactly his base with Vianna da Motta`s “Cenas Portuguesas” op. 9 as well as with the marvellous “Fados” by Alexandre Rey Colaco of 1895. Now the Fados actually are also lyrical songs of the pianists`home. Thus he has the qualitiy for playing the Fados by Oscar da Silva and Eduardo Burnay with empathy, appropriate rhythmic feeling and a lot of singing impetus.

There is at work an absolute pianistic talent bringing close to us music which is more unknown here in this country. He performs it with brilliance and impression.“