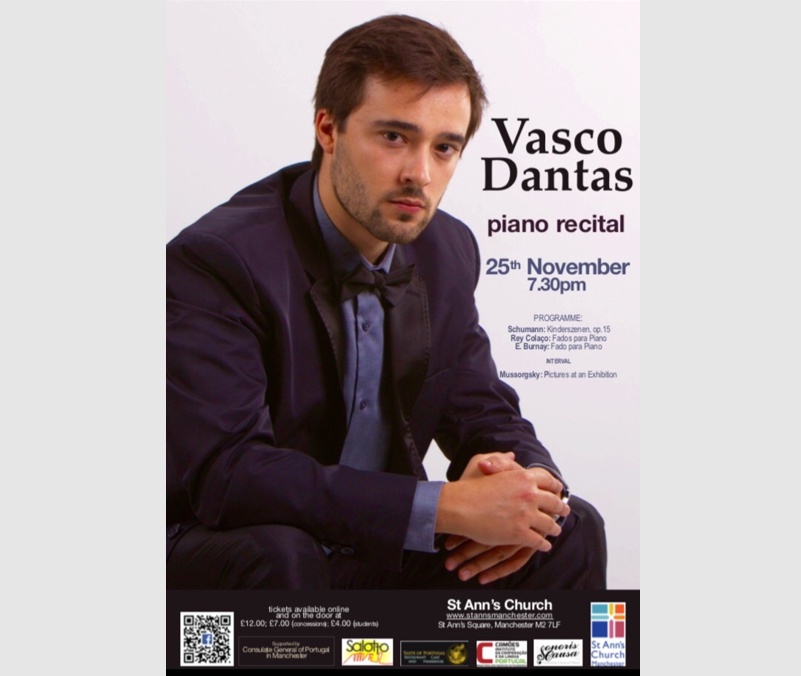 The Portuguese pianist Vasco Dantas performs in solo recital Saturday in Manchester, in a program with pieces by two Portuguese composers, completing the first cycle promoted by the association Sonoris Causa.

Vasco Dantas, 25, studied at the Conservatorio de Música do Porto and completed his degree at the Royal College of Music in London, where he was a student of Dmitri Alexeev and Niel Immelman.

According to his personal web page, he has played in rooms in more than 15 countries across four continents.

The recital is part of the series of four organized by Sonoris Causa, based in the British city of Manchester, in which are also the pianist Artur Pereira, in collaboration with Cristina Sousa.

Created with the purpose of Sonoris to promote young Portuguese musicians and also music of Portuguese composers in the United Kingdom, which is little known, having hosted pianist Daniel Cunha and clarinetist Ricardo Alves, as well as Artur Pereira himself.

“Audiences love the music of Portuguese composers, not only for their novelty but essentially for their quality. I often heard comments of the genre:” Beethoven (or Debussy, Chopin, etc.) were very good, but the Portuguese composer was special, ‘”said the pianist, who has been based in the north of England since 2008.

Artur Pereira confesses that he is proud of these comments, which make him believe in the interest of the project and encourage him to continue, although he acknowledges that the viability of the sponsorship of the Camões Institute guaranteed viability, despite having obtained other support.

This year the room used was St Ann’s Church is a church in central Manchester, but one of the goals for 2018 will be to expand the platform and hold events in London.

“Another idea is to try to get the recital in Manchester to be broadcast live through an international television station, thus giving a global dimension to this stage: Portuguese in the four corners of the world will have the opportunity to see and hear the Portuguese music to be made in Manchester, “he revealed.