“Perfect Harmony from Soloist and Orchestra” 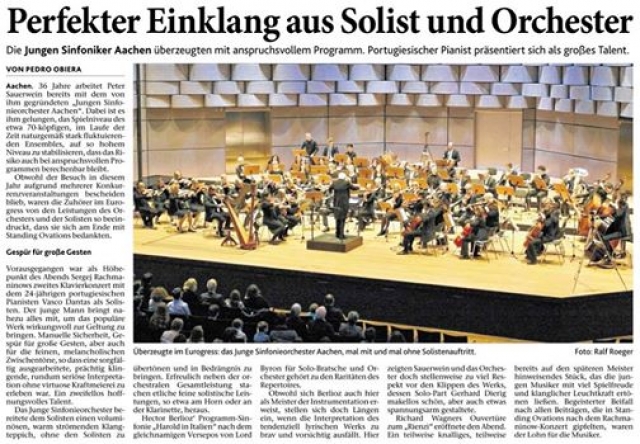 13450198.jpg
(Impressed in Eurogress: the Aachen Young Symphony Orchestra, sometimes with and sometimes without a soloist.) Photo: Ralf Roeger

AACHEN. Peter Sauerwein has worked with the “Junge Sinfonieorchester Aachen” for 36 years. He has succeeded in stabilizing the level of play of the approximately 70-strong ensemble, which naturally fluctuates over time, at such a high level that the risk remains predictable even with demanding programs.

Although the visit remained modest this year due to several competitive events, the audience in Euro-gress was so impressed by the performance of the orchestra and the soloists that they thanked them with a standing ovation in the end.

The highlight of the evening was preceded by Sergei Rachmaninov’s second piano concerto with the 24-year-old Portuguese pianist Vasco Dantas as soloist. The young man brings almost everything with him in order to bring out the popular work effectively. Manual security, a feel for large gestures, but also for the subtle, melancholic nuances, so that a carefully elaborated, splendidly sounding, all-round serious interpretation could be experienced without virtuoso vigor. An undoubtedly hopeful talent.

The “Young Symphony Orchestra” provided the soloist with a voluminous, warm, flowing carpet of sound, without drowning out the soloist and distressing him. Pleasing in addition to the overall orchestral performance, a number of fine solo performances stood out, such as on the horn or clarinet.

Hector Berlioz’s program symphony “Harold in Italy” based on the eponymous episode by Lord Byron for solo viola and orchestra is one of the rarities of the repertoire.

Although Berlioz also proves to be a master of instrumentation here, lengths do arise if the interpretation of the tendency to lyrical work is too good and careful. Here, Sauerwein and the orchestra sometimes showed too much respect for the cliffs of the work, the solo part of which Gerhard Dierig made immaculately beautiful, but also a little tension-free.

Richard Wagner’s overture to the “Rienzi” opened the evening. A partly gaudy piece, partly a reference to the future master, which the young musicians played with great enthusiasm and tonal brilliance. Enthusiastic applause after all the contributions that culminated in a standing ovation after the Rachmaninov concert was the reward for the musicians.