Music: Travel through Iberia and America 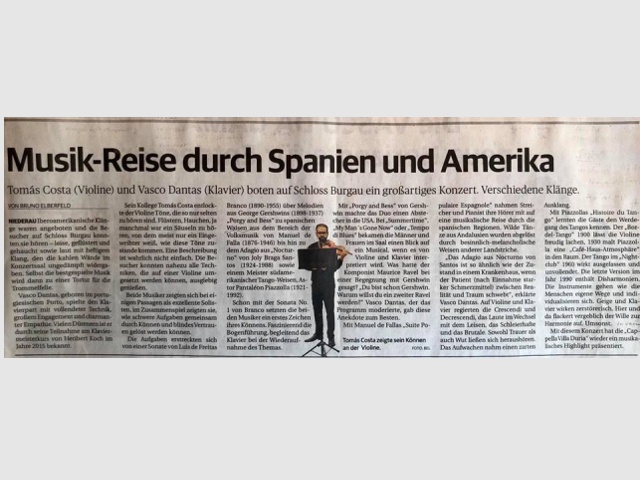 Ibero-American sounds were offered and the audience could hear them – softly, whispered and breathed, but also with an intense sound.

Vasco Dantas, born in Porto (Portugal), played the piano part with highly qualified technique, great involvement and charming empathy.
Many people from Düren have known him since his debut at the opening concert of Heribert Koch’s International Masterclass in 2015.

His colleague, Tomás Costa, made sounds that are rarely heard on a violin. Whispering, breathing and sometimes you could even hear a sigh that only professionals can do. Describing these sounds in words is not really easy. The public was able to enjoy almost all the techniques possible to be played on a violin. Both musicians have shown, in certain passages, that they are also extraordinary soloists.
When they played together, they were able to resolve difficult musical details using their extraordinary talent and blind confidence.

The wide range of musical works was demonstrated with the Portuguese Luís de Freitas Branco ‘Sonata no.1’ and Joly Braga Santos ‘Nocturno’, melodies by George Gershwin ‘Porgy and Bess’, Spanish folk songs by Manuel de Falla and melodies by Tango by the master Astor Piazzolla. With White’s Sonata no.1, both musicians gave an example of their skills. Fascinating bow technique interspersed with the accompaniment of the piano responding to the same melodies.

The duo made a trip to the USA with “Porgy and Bess”. The audience can get a taste of how traditional musical songs, like “Summertime”, “My Man’s Gone Now” or “Tempo di Blues”, can sound like a violin and piano. What did the composer Maurice Ravel say to Gershwin when he went to look for him in France? Ravel said “you are already a Gershwin, why do you want to be a second Ravel?”. Vasco Dantas, who presented the program told this story.

The violinist and the pianist took the audience on a musical journey through Spanish regions playing the De Falla ‘Suite Populaire Espagnole’. Wild Andalusian dances were replaced by thoughtful melancholic sounds.

Vasco Dantas explained that Santos’ adage “Nocturno” is like a hospital situation in which the patient, after taking a strong pain reliever, is fluctuating between reality and dreams. The violin and the piano were dominated by crescendos and decrescendos, mystery and brutality, as well as sadness and fury. In the end, the patient finally wakes up in a delicate way.

The audience got to know the history of Piazzolla’s tango “Histoire du Tango”. “Bordel 1900” gives the violin a happy laugh. In ‘Café 1930’, Piazzolla creates a coffee atmosphere. “Nightclub 1960” sounds wild and unfinished. The latest tango version “1990 concert d’aujourd’hui” contains disharmony. Instruments go their own way as people. The violin and the piano now have a destructive effect. Here and then, the need for harmony increases. In vain.