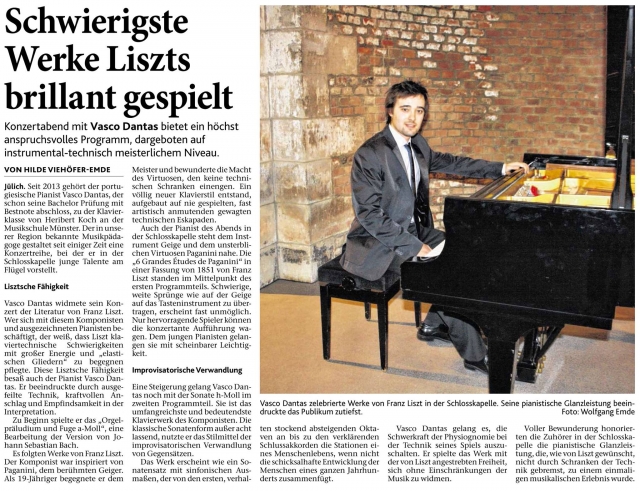 Evening concert with Vasco Dantas offering a highly ambitious program, presented with an instrumental technic on a masterful level.

Since 2013 belongs to the Portuguese pianist Vasco Dantas the completed Bachelor exam with “1st Class & Distinction” at Royal College of Music, and who is now in the piano class of Heribert Koch at the Music School in Münster.

The well-known in our area music pedagogue has created for some time a series of concerts in which he introduces young piano talents in the “Castle-Chapel”.

Vasco Dantas dedicated his concert to the repertoire of Franz Liszt. Those who deal with this 19th century composer and excellent pianist know that Liszt dealt with the piano technical difficulties with great energy and “elastic members”. This Liszt’s ability had also the pianist Vasco Dantas. He impressed by sophisticated technique, powerful attack and sensitivity in interpretation.

At the beginning he played the “Organ Prelude and Fugue in A Minor,” a transcription of Johann Sebastian Bach’s original work.

Works of Franz Liszt followed this. Paganini, the famous violinist, inspired the composer.

As a 19-year-old Liszt met the Master and admired the power of this virtuoso, with no technical barriers. An entirely new piano style was created, based on technical artistic escapades never played until then.

The pianist of the evening in the chapel sounded very close to the violin of the virtuoso and immortal Paganini. The focus of the first part of the concert were the “6 Grandes Etudes de Paganini” in a version from 1851 by Franz Liszt. The long jumps transferred from the violin to the keyboard instrument appeared difficult and almost impossible. Only the best players can venture a concert performance. And this young pianist was successful with apparent ease.

An increase succeeded even with the Sonata in B minor by Vasco Dantas in the second part of the program. It is the largest and most important composer’s piano work. Avoiding the traditional sonata form, he works with improvisation-like transition of opposing characters.

Vasco Dantas managed to unlock the gravity of physiognomy in the art from of his playing. He played the work with the objective of Liszt’s freedom to devote himself without any restrictions to the music.

The audience in the chapel rewarded with a full admiration the pianistic brilliant performance, which, as desired by Liszt, was not hampered by barriers of technique and it all became a unique musical experience.