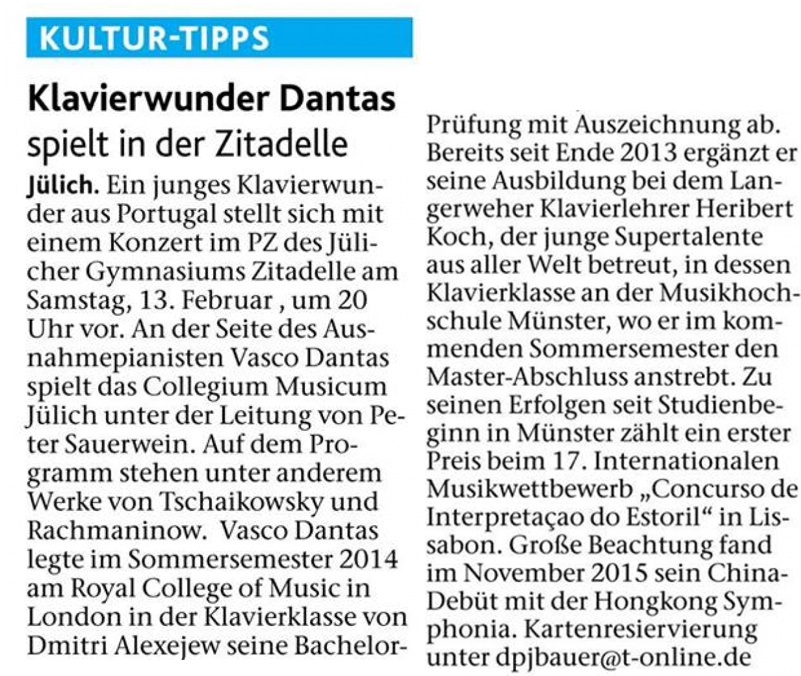 “Pianist-wonder Dantas performs in the Zitadelle Jülich.
A young pianist-prodigy from Portugal will present himself at the Zitadelle Jülich on Saturday 13th February at 20h. The exceptional pianist performs solo with the Sinfonieorchester Jülich conducted by Peter Sauerwein.
The programme includes works from Tchaikovskyand Sergei Rachmaninoff.
In 2014, Vasco Dantas graduated with the “Bachelor in Music with honors” in the class of Dmitri Alexeev and Niel Immelman at Londres Royal College of Music. He has also been studying since the end of 2013 with Heribert Koch, Pianist. Heribert Koch trains very talented pianists from all over the world. He teaches at Musikhochschule Münster, university where Vasco Dantas will graduate with a Master degree this year. Since he has been studying in Münster, Vasco Dantas was awarded the 1st Prize at the 17. International Music Competition “Concurso de Interpretação do Estoril”, in Lisboa.
He received great acclaim at his China-debut with the Hong Kong Symphonia, in November 2015.
Ticket office at dpjbauer@t-online.de”