“German Music with a Portuguese Slant” 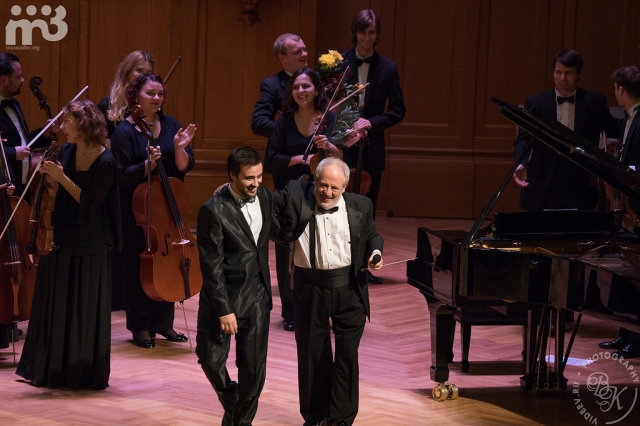 November 29 The Chamber Orchestra “KREMLIN”, under the direction of its artistic director Misha Rakhlevsky, presented a new program to Moscow music lovers in the Great Hall of the Moscow Conservatory .

Rakhlevsky is a great original in everything, and therefore, for all the sophistication of the evening’s program, at first glance for a simple listener it was somewhat unexpected and strange. This evening the orchestra decided to “make friends” for the twentieth century and the eighteenth century in the person of Anton von Webern, Ludwig van Beethoven and Franz Schubert. Despite the difference in styles and epochs, all the compositions were beautifully connected in one concert. The seeming oddity of choice has disappeared, perhaps because Beethoven, Webern and Schubert are representatives of Austria and Germany – related countries.

With all the necessary nuances, “Langsamer Satz” was played. One of the founders of the “Novovenskaya” composers’ school Rakhlevsky and his orchestra showed a real “child of the century” of the beginning of the 20th century – nervous, impetuous, with vibrato in strings. Misha is a connoisseur of such music. He subtly feels the era, in addition to this, having an impulsive conductor’s gesture and detailed phrasing of the work, which, of course, played only for the benefit of execution.

The next work by Webern on sounding differed in many respects from “Langsamer Satz”, since it belonged to the “atonal” part of the composer’s work. For listeners, an adequate perception of the ten-minute “Five Parts for Strings”, Op. 5 – almost flour. Ragged rhythm, almost complete absence of a melody in its classical understanding and incomprehensible to many sound effects had to be understood and experienced. To the credit of the team, the orchestra coped with the task posed to it – the staff did not get mixed up in rhythms and maintained the tempo complexity of the work, for which it was awarded by the audience with well-deserved applause.

In the fourth concert for pianoforte and orchestra, in harmony with Beethoven’s soloist ( Vasco Dantas (Portugal)), performed in the arrangement for the chamber orchestra of Vincent Lachner, the orchestra justified the name “chamber”, presenting listeners with the beautiful singing sound of strings and harmonious ensemble of musicians who turned out to be so is good as a separate creative unit, and together with the soloist!

By the way, the soloist Vasco Dantas almost completely refuted the idea of ​​how the representative of Portugal should play. He is not a strong temperamental pianist, but at the same time he has a great sense of music, excellent technique of the game, and he has an undoubted ability to improvise. His Beethoven turned out to be without the usual listener and associated with the German “shock tempo” and sound, but with subtle nuances, long piano phrases and high game speed. Vasco Dantas tried to show his audience his personal interpretation of the Beethoven concert – with a clear lyrical beginning. Here the orchestra helped the pianist completely in the embodiment of his ideas. Gently and with a delicate phrase the symphonic part of the concert sounded. One of the obvious merits of Rakhlevsky as a conductor – also in that, that he knows how to really hear and listen to the soloist. The idea of ​​the pianist was accepted by the public favorably, and Vasco made an encore, playing a Portuguese Melody, a Fado.

The second section of the concert was also given to German music. The string quartet of Schubert was announced in D minor with the unofficial name “Girl and Death”. The work itself was written at the time of the composer’s deep spiritual crisis, which, of course, found its reflection in music.

The orchestra managed to introduce listeners into a state of melancholy and to think about the eternal. The chamber orchestra expressed with its magic sound the whole spectrum of emotions from the meeting of the heroine with eternity – from the whirlwind of life in the first part to parting with life at the end.

Separate praise deserves a group of violins, which with its nervous and rich sense of sound kept the audience in suspense throughout the entire quartet. With tremendous verisimilitude, the team managed to show the attenuation of the life of the main character. “To help” soloists were invited to the stage, vocalists performing the Death and Girls parties. The orchestra could well have sounded without such support, but for the completeness and authenticity of the sound of the work, this, of course, was extremely important. Unfortunately, the soloists did not make the proper impression: Death seemed too much rooted in its own greatness, and the Girl – though with a beautiful voice, but too ardent.

Rakhlevsky succeeded in getting rid of the feeling of sadness easily: leaving the stage, he offered the audience a playful jazz “bandit” encore with the solo Vasco Dantas, to whom jazz syncopes were given no worse than Beethoven’s sheet music. The main “surprise” for listeners was that the conductor danced, and the orchestra was beating in the literal sense “on the go”, leaving the stage in the artistic hall of the Great Hall of the Conservatory.

This move became the elegant final point of the evening.

Surely in this program, the Chamber Orchestra “KREMLIN” and Misha Rakhlevsky set themselves an ambitious task not only to play the “classics” – Beethoven and Schubert, but also to introduce the music of the “new born” Webern to a little. Judging by the responses from the zalaorkestra, it was successful. It seems that this enlightening moment in the work of the orchestra is not just remarkable, it is simply necessary for the “upbringing” of the listener. And it’s great.

According to Rakhlevsky, in the further plans of the orchestra there are a lot of various concerts, including interactive programs for children “Look and Listen”, and in the Great Hall of the Conservatory you can hear the band very soon – on January 17 in a concert called “Well, very old New year”.