Broadcast of “Golden Liszt” CD of the day, by MDR Klassik 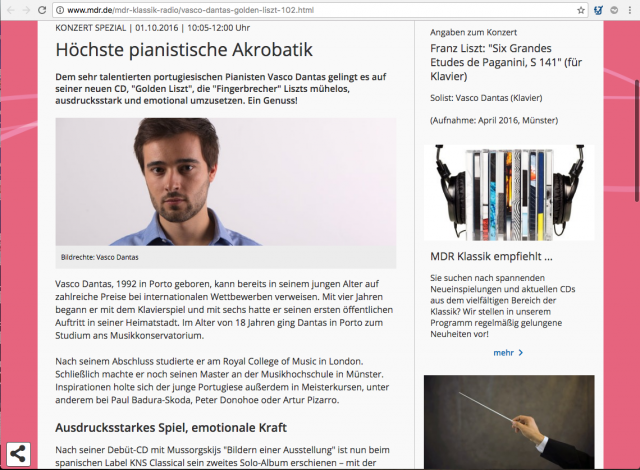 Pianist Vasco Dantas
Image rights: Vasco Dantas
Vasco Dantas, born in Porto in 1992, can count on numerous prizes in international competitions at a young age. He started playing the piano at the age of four and had his first public appearance in his hometown at the age of six. At the age of 18, Dantas went to the Music Conservatory in Porto to study.

After graduating, he studied at the Royal College of Music in London. Finally, he completed his master’s degree at the music college in Münster. The young Portuguese also took inspiration from master classes, including with Paul Badura-Skoda, Peter Donohoe and Artur Pizarro.

Expressive game, emotional power
After his debut CD with Mussorgskij’s “Pictures at an Exhibition”, his second solo album has now been released by the Spanish label KNS Classical – with the large B minor sonata and the six Paganini etudes by Franz Liszt. The highest level of piano acrobatics is required.

Painting by the violinist Nicolo Paganini.
Painting by the violin virtuoso Niccolò Paganini (1782-1840). Image rights: IMAGO
Liszt was known, almost feared for his “studies”. The finger exercises have always broadened the pianistic boundaries in the search for perfection and still cause pianists to despair. The “6 Great Etudes According to Paganini” are such a finger breaker. In 1832 Liszt commented after seeing the devil violinist live:

What a man, what an artist, what suffering in these four strings!

Franz Liszt, composer
Dantas creates what makes others despair
In this context, the bravura fantasy arose from the famous “Campanella” motif from Paganini’s B minor violin concerto. In 1838 Liszt wrote further studies on Paganini’s solo caprices. In 1851 he then created the versions of the Paganini etudes that are common today.

Vasco Dantas seems to be able to cope with the technical difficulties with ease. He also manages to add emotional power to the studies with his expressive play, so that the finger breakers become elegant pieces of pleasure.