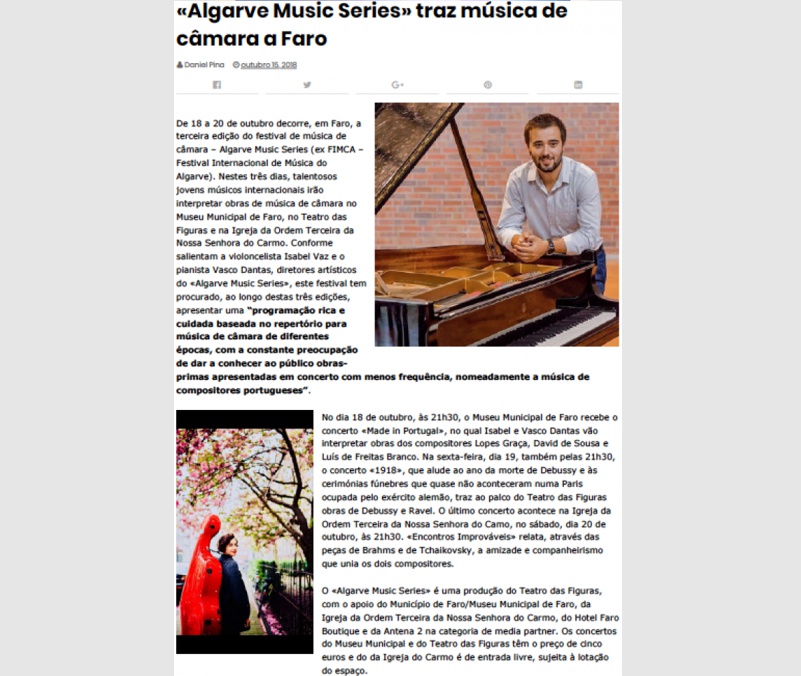 From October 18th to 20th, the third edition of the chamber music festival – Algarve Music Series (ex FIMCA – International Music Festival of the Algarve) will take place in Faro.

«Algarve Music Series» brings chamber music to Faro
Daniel Pina October 15, 2018
In these three days, talented young international musicians will perform chamber music at the Municipal Museum of Faro, at the Teatro das Figuras and at the Third Order Church of Nossa Senhora do Carmo. As noted by the cellist Isabel Vaz and the pianist Vasco Dantas, artistic directors of the “Algarve Music Series”, this festival has sought throughout these three editions to present a “rich and careful program based on repertoire for chamber music from different eras, with the constant concern to make known to the public masterpieces presented in concert with less frequency, namely the music of Portuguese composers. ”
On October 18, at 9:30 p.m., the Municipal Museum of Faro hosts the concert “Made in Portugal”, in which Isabel and Vasco Dantas will perform works by composers Lopes Graça, David de Sousa and Luís de Freitas Branco. On Friday, the 19th, also at 9.30 pm, the concert “1918”, which refers to the year of Debussy’s death and the funeral ceremonies that almost did not happen in a Paris occupied by the German army, brings to the stage of the Theater of the Debussy and Ravel. The last concert takes place in the Church of the Third Order of Our Lady of the Camo, on Saturday, October 20 at 9:30 p.m. “Unlikely Encounters” relates, through the plays of Brahms and Tchaikovsky, the friendship and companionship that united the two composers.
The Algarve Music Series is a production of the Teatro das Figuras with the support of the Municipality of Faro / Municipal Museum of Faro, the Church of the Third Order of Nossa Senhora do Carmo, the Hotel Faro Boutique and the Antena 2 in the media category partner. The concerts of the Municipal Museum and the Theater of the Figures have the price of five euros and the one of the Church of the Carmo is of free entrance, subject to the capacity of the space.